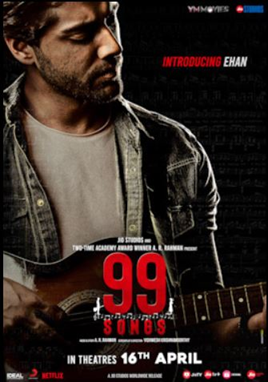 The newbie Ehan Bhat will be making his debut with the legendary musician AR Rahman’s first Hindi production, ’99 Songs’. In a video, Ehan Bhat recently opened up about his dreams and the film, as well. He says that his dream is to be the greatest actor.

In the same video video, Ehan Bhat is seen answering a few questions about the film and himself. When he was  asked  that how excited he is for ’99 Songs’, he said that he feels like he is on the top of the world. The  debutant actor added that he is delighted that the movie is finally releasing in the theatres on 16th of April, 2021.

According to Times Of India, when he was asked if the film features 99 songs as the title suggests, but he clarified that the movie has only 14 songs. 99 Songs is directed by debutant Vishwesh Krishnamoorthy, is a romantic musical drama film. It is a beautiful story of art and struggling of a singer who wants to become a successful music composer.