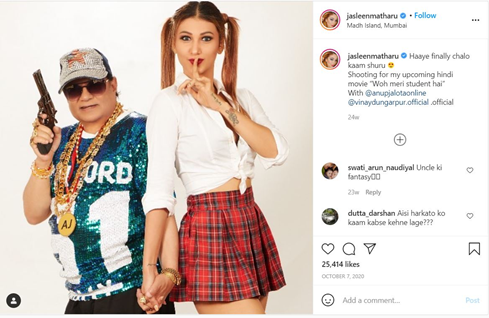 The Teaser of  The Movie “Woh Meri Student Hai”  Is Out !

The teaser of the movie  Woh meri Student Hai is finally out. This movie is going to be a very Interesting moving. The movie ” Woh Meri Student Hai” features Anup Jalota and Jasleen  Mathura. The lead actor of this film, Anup Jalota is a  very well-known Indian singer, musician as well as an actor who is popularly referred to as the Bhajan Samraat of India and he has also sung many popular devotional songs and ghazals in Hindi. He would be seen opposite to her co-contestant from a reality show, Jasleen Matharu, who is an actress as well as a Big Boss 12 contestant, in the movie Woh Meri Student hai.

This couple rose to fame when they entered in Colours reality show. They were known as  ” vichitra couple ” as they both have an age gap of 37 years.  While they were in the reality show they stated that they were dating for three years. Later when they left the reality show, they denied the fact of being in any relationship, they said that it was all a marketing tactic.

After few days of the reality show they declared that they were going to make film ” Woh Meri Student Hai”, and Jasleen Mathura shared the first look  of her movie in Instagram Page. She captioned her post as : “Haaye finally chalo kaam shuru Shooting for my upcoming Hindi movie “Woh meri student hai” With @anupjalotaonline @vinaydungarpur.official .official”.

It has been said that this movie is actually inspired by their real life where Anup Jalota would be seen as the singer whereas Jasleen would be seen as his student. The most interesting fact is, Anup Jalota once said the same statement when he was on the Colors reality show,that  his relationship with Jasleen stating that she was just his student. Jasleen Matharu shared the first look of the movie, on Instagram.

The director of this movie is Jasleen Mathura’s father. The movie ” Woh Meri Student Hai” has been written, directed and produced by Kesar Matharu. The teaser of this film is finally out and the release date will be announced soon. They promised it to be a very funny and different film.

The release date is yet to be known. So what are you waiting for? Get ready to watch your favorite ” vichitra couple ” on the big screen! Stay tuned for more updates.

This April Get Ready For Lehja!