Taapsee Pannu was shocked after seeing her electric bill of June 2020. the company sent her the bill of 36000 for 1 month, not just taapsee but also comedian Vir Das and actor Dino  Morea also face the same problem with the electricity bill. Vir Das tweets” Anyone else in Mumbai get the electricity bill triple what they usually pay” on this many other famous actor like Dino Morea ,Kaneez surkha, Shruti Seth and Amyra Dastur facing the same problem. 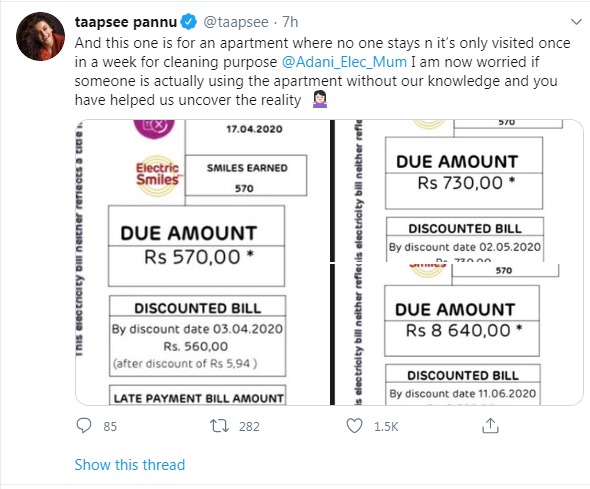 After seeing the bill taapsee sarcastically tweet ” 3 Month of lockdown and i wonder what appliance(s) i have newly use or bought in the apartment only to last month to have this insane  rise in electricity bill. @Adani_Elec_Mum what kind of POWER are you charging for”also she shared the pic of the bill for last 3 month

Also she mentioned that the bill was of the apartment  which is vacant right now and she think someone is using her apartment behind her back “And this one is for an apartment where no one stays n it’s only visited once in a week for cleaning purpose, @Adani_Elec_Mum I am now worried if someone is actually using the apartment without our knowledge and you have helped us uncover the reality,” she wrote.

After listing to this many fans make fun of the bill by saying “flim collection ke hisaab se bill dete hai” and one has wrote ” looks like they innocently misplaced the decimals”.