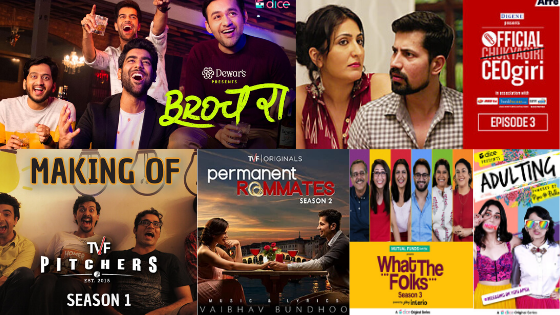 Are you bored of the Netflix, Prime, Hotstar and Zee?

Here we bring you the Must Watch Youtube Web Series you can’t miss in this lockdown.

The show brings in the new generation reality along with comedy and emotions. It is sponsored by Lakme. It already has more than 5 Million Views.
Channel: Y-Films
Cast: Ali Fazal, Ayesha Raza, Rajit Kapur, Shernaz Patel.
TO WATCH: CLICK HERE

What if? This is what the series is based upon!
What if women treated men , the way men treat women?
The series promotes Goal 5 of United Nation’s 17 Goals of Sustainable Development and guess what is the Goal 5?
It’s GENDER EQUALITY!
Channel: Y-Films
Cast: Parineeti Chopra, Kalki Koechlin, Richa Chadda, Soni Razdan, Bhumi Pednekar, Rhea Chakraborty and others.
TO WATCH: CLICK HERE

The web series by TVF plots how engineers quit their jobs and start their own start-ups. The show is a motivating one for all the growing engineers who wish to become entrepreneurs.
Channel: TVF
Cast: Naveen Bansal, Jitendra Maheshwari, Yogendra Kumar Pandey, Saurabh Mandal.
TO WATCH: CLICK HERE

A much needed series for all the couples to explore the little things that make and break our relationships. Lot of things to learn but this series is complete adorable.
Channel: Dice Media
Cast: Dhruv Sehgal and Mithila Palkar.
TO WATCH: CLICK HERE

The story is about two besties and their mental adventures they go through in six different bathrooms and the six episodes of the series portray the case of each bathroom. It’s also about the young struggling girlfriends and their struggle to grow.
Channel: Y-Films
Cast:  Saba Azad, Shreya Dhanwanthary, Gopal Dutt, Pawan Uttam and Jagdish Rajpurohit.
TO WATCH: CLICK HERE

Permanent Roommates was the first series launched by TVF which has over 10 Million views. It is a flawless drama series which is fearless and has the best situational comedy.
Channel: TVF
Cast: Sumit Vyas, Nidhi Singh, Nidhi Bisht and Deepak Mishra.
TO WATCH: CLICK HERE

A.I.SHA: My Virtual Girlfriend is the latest most watched Youtube web series which is thriller comic about romance and technology in modern India.
Channel: Arre
Cast: Harman Singh, Nimisha Mehta, Auritra Ghosh, Raghu Ram.
TO WATCH: CLICK HERE
Hope you liked are blog of The Must Watch Youtube Web Series.
Stay tuned with us for all the updates around the world.