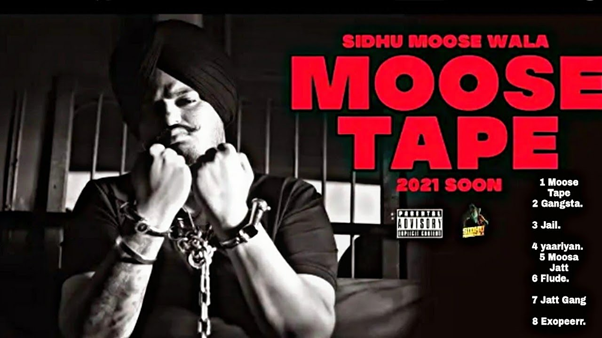 Sidhu Moose Wala is finally back after such a long break from social media. He knows that he has broken the heart of many people by taking such a long break so to make it up for his fans he is going to release a brand new album called Moose Tape. This upcoming album includes 25 tracks, which is really a long list considering an album.

Even the shared some thoughts with us that is, in spite of being a boy from a middle-class family, he managed to become a big star today with the blessings of almighty. He even shared that there was a time when he used to look at the stage from the last row but today he is in the spotlight on the stage and all this is possible because of his hard work. He had lots of struggles in life but he fought against them like a lion and he compared the problems to a jackal cowering in front of the lion. He addressed all his fans as his own brother who has always supported him. He firmly believes that his mother’s prayer saved him from falling and his father’s blessings saved him from crashing and because of them, Sidhu is successful in his career, today.

Sidhu dropped his album 2 years back and from that time he gets a huge fan base worldwide. Sidhu has collaborated with international artists like Mist, Stefflon Don, the fans were eagerly waiting for this album as he did many international collaborations with artists. He has collabed with rappers from India like Divine So, After the release of the cover art of the album fans and getting crazy to listen to this album. The release date of this song is not released, yet but the teaser is already out.

The First Look Of The Album:

Link Of the teaser :

So go and get ready to listen to this amazing album, Moosetape. This album is going to stream on Youtube so make sure you listen to it and don’t forget to stay tuned to get more exciting updates daily!