Fresh trouble rises for Tik Tok Star Faizal Siddiqui after National Commission for Women, Government of India issued a notice for his uploaded video on Tik Tok that glamorizes Acid Attack on women. The NCW issued a formal notice to Faizal Siddiqui after a popular politician from Mumbai posted the video on his twitter account and asked the NCW to take action.
Faizal Siddiqui is a member of Team Nawab of Tik Tok Star Amir Siddiqui. Amir Siddiqui is already facing trouble from the public and an FIR was also registered against him last week. Team Nawab seems to be in serious trouble as two legal pillars, the NCW and Mumbai Police are geared for the chase of this shameless Team Nawab.
The Tik Tok star is facing criticism on social media. Netizens are tagging him on twitter and asking the Tik Tok to ban his account. The youths of today’s generation should promote the nation first instead of promoting Acid Attack on women. The NCW was really disappointed by the video and slammed the star as soon as it received the video of Faizal Siddiqui.
Meanwhile, two formal complaints were lodged against Faizal Siddiqui apart from NCW. Two angry responsible citizens lodged the respective complaints with the Cyber Branch Cell of Greater Mumbai and Delhi Police. They posted the picture of the complaint on Twitter. 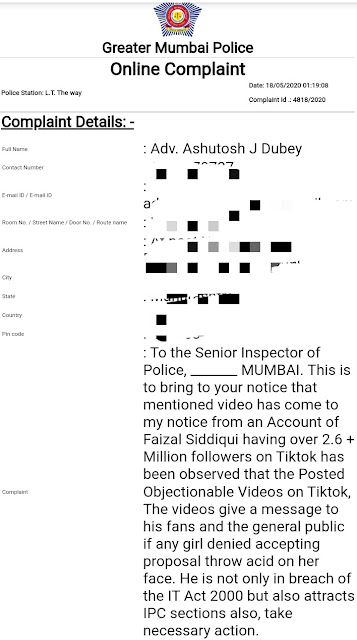 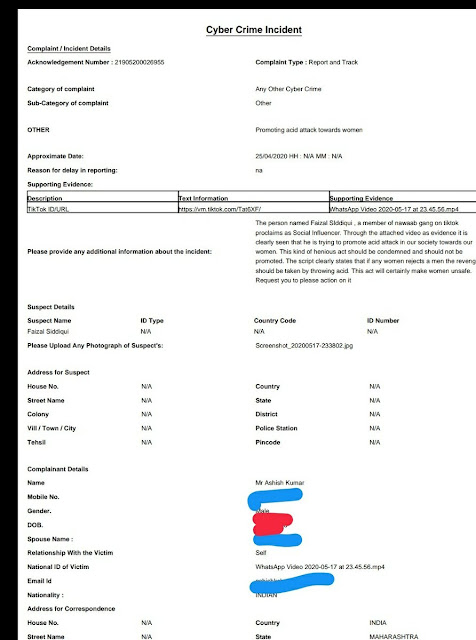 Source: Twitter
Meanwhile, the NCW said that it will take legal action very soon against Faizal Siddiqui after coordinating with Police.

Here is the video by Faizal Siddiqui which spread hatred and promoted Acid Attack against women: