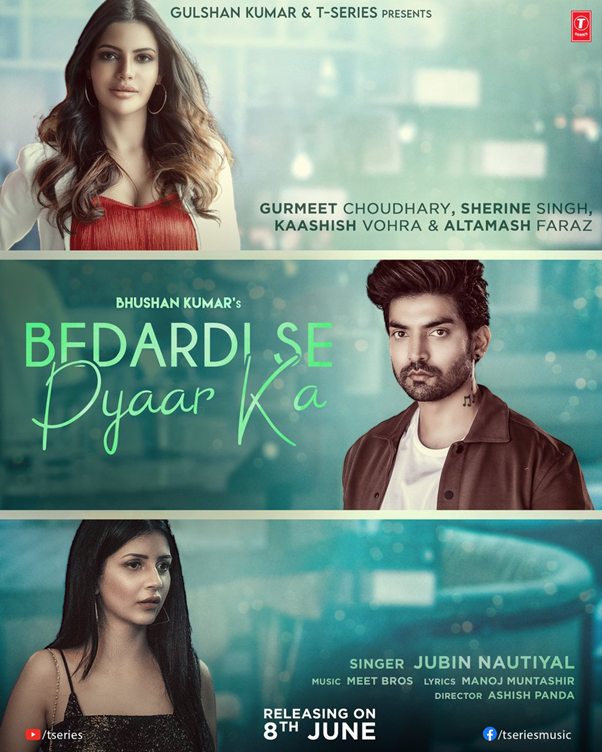 As promised in the earlier post we have come up with some exciting updates. So, to all the music lovers, get ready to add a song to sway yourself in the upcoming song, Bedardi Se Pyar Ka. As we all know, Jubin Nautiyal The most celebrated artist in recent times, he will be releasing his next single soon titled ‘Bedardi Se Pyaar Ka’. ” Bedardi Se Paar Ka ” is presented by Bhushan Kumar’s T-Series. In this thrilling unrequited song, we will be seeing  Gurmeet Choudhary, playing the role of the heartbroken protagonist.

The music video is shot by Ashish Panda in the locals of the beautiful Mussoorie and Dehradun. This upcoming thrilling melody ‘Bedardi Se Pyaar Ka’ throws the light to the innocence of love and the pain of broken promise. The song gives the audience a glimpse of the quiet and peaceful lanes of the hill stations.

Do you know that we have real unbelievable news for you? We have go to know that the actor Gurmeet Choudhary shot for 23 hours non-stop for his new single. Can you imagine he is working so hard for his fans? We are sure that his hard work will surely pay off!

The poster itself about this upcoming thrilling melody. The poster of  ” Bedardi Se Pyaar ka” has a background of dirty green starring three actors in three rows with three different backgrounds. The post is starring Gurmeet Choudhary, Sherine Singh, Kasish Vohra.  The poster mentions that this song is a Bhushan Kumar’s T series presentation. This song ” Bedardi Se Pyaar Ka ” is starring at Gurmeet Choudhary, Sherine Singh, Kasish Vohra and Altamash Faraz. This upcoming thrilling melody is sung by Jubin Nautiyal. The music is handled by Meet bros, lyrics are penned down by Manoj Muntashir and the director of the song is Ashish Panda. The poster also tells the audience that this song is going to release on 8th June 2021.  The actor Gurmeet Choudhary uses his Instagram handle to give a glimpse of his upcoming melody, ” Bedardi Se Pyaar Ka”. He wrote, ” Ever had a heartbreak? #BedardiSePyaarKa is here to make you feel all the deepest emotions you had for your first love.

lyrics will be updated after the release of song

Link of The trailer of the song Bedardi Se Pyar Ka:

So go and get ready to add this upcoming thrilling melody of heartbroken love story, “Bedardi Se Pyar Ka” in your Summer Playlist, and don’t forget to stay tuned to get more exciting updates daily!