Legendary singer Ankit Tiwari, who recently won all hearts with his soulful voice in “Tum Se Hi”, is coming up with a new song, featuring YouTuber Mahesh Keshwala (Thugesh) and Anaya Shah. Neither the title nor the release date of the song has been revealed yet. 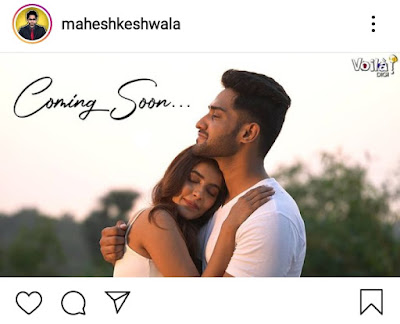 Mahesh Keshwala (Thugesh) is a YouTuber and Video Creator. He has two YouTube channels – Thugesh (1.6 Million subscribers) and Thugesh Live (230K subscribers). This is going to be his debut music video.
Mahesh Keshwala (Thugesh) shared the poster of his debut song on his Instagram handle, and wrote: “I m glad to share with you that my first music video will be out soon! I m sure you guys will love it. Stay tuned”.
The poster showcasing Anaya Shah and Mahesh Keshwala (Thugesh) embracing each other was also shared by Anaya Shah on Instagram. Voila, Digi also shared the poster.
The unnamed song starring Anaya Shah and Mahesh Keshwala (Thugesh) has been sung by Ankit Tiwari. The lyrics of the song have been written by Aniket Shukla, who has also composed the song. Directed by Sidhaant Sahdev and produced by Girish Jain and Vinit Jain, this song is releasing under the label of Voila Digi. Nicks Kukreja has been the music producer of the song, while Nidhi Shah (All About Face by Nidhi Shah) has been given the credits for hair and make-up. Special thanks have been given to Karishma.
Fans are desperately waiting for Ankit Tiwari to reveal the title and release date of his upcoming song, featuring Mahesh Keshwala (Thugesh) and Anaya Shah.
Also Read :
Also Read :“Lambocar” Featuring Guri And Neha Sharma Released
Also Read :“Abey Yaar” – New Song Featuring Fotty Seven and Rapper Bali
also Read :Divya Khosla Kumar’s New Song “Besharam Bewaffa