With an exponential increase in the usage of fuel-run vehicles and a significant hike in fuel pricing acting as a catalyst, the times are seemingly right for a market of electric vehicles to boom. Although many electric vehicles were to be launched by different companies in 2020, the pandemic delayed almost all of them, and now we can expect them to be launched in India soon and rule the roads.

So here we bring our list of the top 5 upcoming electric bikes in India that are about to hit the market this year. 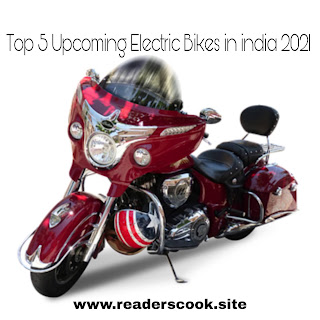 Making its way into our list of top 5 upcoming electric bikes in India defeating most of the electric bikes in this segment is AE-47 from Hero Electric. This bike was showcased at the 2020 Auto Expo that was held in February. The heart of this vehicle is a 4 kW hub motor which is said to provide a booming top speed of 85 kmph and can achieve 0-60 kmph in 9 seconds. A removable 3.5 kWh battery can run the bike up to 160 km in Eco mode and 85 km in Power mode. Zero to the full charge of this battery can be achieved in four hours. Expected to launch in November 2021, this bike from our list of top 5 upcoming electric bikes in India is expected to come in the price range of ₹1.25 to ₹1.5 lakhs.

Coming in at the fourth spot in our list of top 5 upcoming electric bikes in India is the Emote Electric Surge, which stands out from the pack for its looks and also for its performance at the expected price point. It is of its kind, geared electric bike that comes in with a 4-speed gearbox that provides a better riding experience. Packed with a 28 Nm electric motor, this bike claims to have a top speed of 120 kmph. This motor is backed up by a 2.88 kWh battery pack which weighs 26 kg and provides a range of 100 kms. However, Emote claims that this range can be increased up to 300 kms by carrying 2 spare battery packs. A zero to complete charging will require four hours with a standard charger and just half an hour with a fast charger. This bike from our list of top 5 upcoming electric bikes in India is expected to launch in September 2021 at a price point of ₹1 lakh.

The Ultraviolette F77 is a true sports bike all in terms of acceleration, top speed, and range and ticks all the boxes required in a performance sports bike. Climbing up to no. 3 in this list of top 5 upcoming electric bikes in India, produced by an Indian start-up based out of Bengaluru. After receiving funding of ₹30 Crore from TVS motors, the production of this bike has seemingly progressed. Powered by an electric AC motor of 25 kW which produces a torque of 90 Nm, this bike is claimed to achieve 0-60 kmph within 2.9 seconds. A 4.2 kWh battery provides a range of 130-150 kms. It is equipped with a USD fork at the front and a mono-shock at the rear.  It also has disc brakes on both ends and a switchable dual-channel ABS. With already having started with deliveries from October 2020, and comes in at a pretty decent price point of ₹3 lakhs.

Rivaling the Ultraviolette F77 with a naked streetfighter look and specifications that of being comparable to any sports bike at its price point, the Orxa Mantis surely had a slight edge over Ultraviolette F77 and hence stands 2nd in our list of top 5 upcoming electric bikes in India. It was revealed by its parent company Orxa Energies at the India Bike Week in Goa. It comes with a 25 kW power-packed motor that is backed up by a stack of 6 battery packs delivering 9 kWh which weigh 65 kgs in totality. The promised charging time is less than 3.5 hours using a 15 A charging socket. Suspension being similar to the F77 with a telescopic fork at the front and a mono-shock at the rear, the braking system uses disc brakes too. Expected to be launched by mid-2021, this electric bike from our top 5 upcoming electric bikes in India is expected to be priced in the range of ₹3 to ₹4 lakhs.

The most highly anticipated upcoming electric bike has to be the Evolet Hawk for its great design, amazing specifications with and even better-expected price point. The Evolet Hawk electric was firstly showcased at the Auto Expo 2020. It is powered by a 3kW BLDC motor and a Li-ion battery that is expected to charge from zero to full within5 hours. Evolet Hawk claims a top speed of 80 kmph and a range of 150 km on a single charge. It comes in with a sculpted front fairing and a projector headlamp. Along with features like clip-on handlebars and a fully digital console, it comes with telescopic front forks and a mono-shock rear suspension. Braking is handled by twin disc brakes on the front wheel and a single disc brake system on the rear wheel. Expected to launch in October 2021, this bike is expected to take the market by a storm as it’ll be available at a price point that’s expected to be in the range of ₹1 to ₹1.25 lakhs.