Match of the Day:- 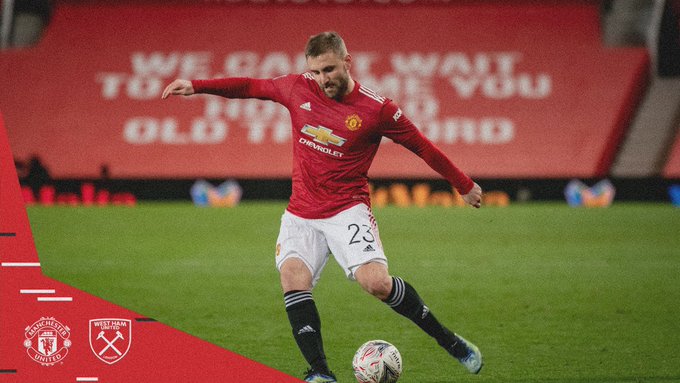 A resolute West Ham managed to hold Manchester United till Extra Time despite their injuries but the introduction of talisman Bruno Fernandes and in form stars Scott Mctominay and Luke Shaw(in the pic above) proved too much for a depleted Hammers' side. With Angelo Ogobonna's early game injury followed by substitute Issa Diop having to go off due to a concussion it always seemed like a mountain to climb for West Ham. But resolute defending by Declan Rice and Mark Noble led to a valiant performance. Manchester United's attacking trio of Marcus Rashford Mason Greenwood and Anthony Martial were lethargic and looked knackered, possibly due to the heavy schedule.

Manchester United made 6 changes while West Ham made 3 from their last match. Alex Telles was a bright spot and he created 3 chances within the first 30 min. Fabianski made 2 good saves but was rarely threatened. West Ham themselves rarely exposed the frail United defense and registered their first shot in the 114th minute. Martial had an opportunity late on but it did not matter much as the Red Devils secured their passage to the quarterfinals for the 7th year in a row

West Ham tried to launch a few attacks in the first few minutes but Manchester United had more or less complete control of the first half. Anthony Martial was played in after a one-two between Alex Telles and Marcus Rashford and vital clearance by Angelo Ogbonna prevented him from scoring. However, it was at some personal cost as the defender had to be taken off. Issa Diop was his replacement. The Red Devils pressed high but the Hammers defended resolutely. The most notable chance came midway through the first half with Victor Lindelof's Header being parried to the post by the goalkeeper Lucas Fabianski. There was a clash of heads between Martial and Diop from West Ham's corner but little else as the Hammer's made several vital blocks to prevent the Red Devil's from causing damage.

West Ham made two changes to start the second off with the substitute Diop being replaced by Ryan Fredricks and Ben Johnson coming in for Jarrod Bowen. Yarmalenko too picked up a knock and was withdrawn for Ademipo Odubeko. Marcus Rashford had a good chance saved in the 55th minute after Mason Greenwood crossed the ball in and Martial sliced his shot. West Ham started to grow in the game and Thomas Soucek dribbled past Wan Bissaka and tried to tee up his teammate only for an important block by Victor Lindelof. Man United then made a double chance in the 73rd minute with Bruno Fernandes and Scott Mctominay coming in for Donny Van de Beek and Nemanja Matic. The Red Devils threatened occasionally but the Hammers' defense was resolute and firm. Edinson Cavani came on for Greenwood on the 86th minute. Said Benrahma came on for Pablo Fornals on the 88th minute. Wan Bissaka then made a few vital blocks in added time and the game went to extra time.

Luke Shaw and Brandon Williams came on for Telles and Wan Bissaka respectively.

The Breakthrough finally came through Scott Mctominay with Luke Shaw winning the ball in Man United's half and then Marcus Rashford and Bruno Fernandes counter-attacking. Martial then crossed the ball but it was not cleared properly by the Hammer's defense and Rashford 's deft touch setting Mctominay up for a low volleyed finish into the bottom right corner. After that Manchester United managed to close the game out and secured the victory.

After a goalless first half in which Getafe did not even register an attempt, Madrid took the lead through Karim Benzema with Ferland Mendy doubling the host's advantage.

Juventus and Inter Milan played out a goalless draw which sees Juventus progress to the final thanks to the 2-1 win in the first leg.