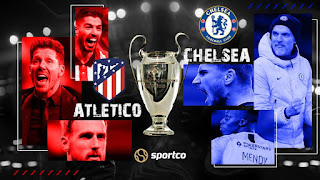 2012 Champions League winners face Atletico Madrid in a rematch of their 2013-14 semi final tie which saw Atletico Madrid emerge winners. The  Blues have been rejuvenated by the appointment of new manager Thomas Tuchel and haven't lost a match since, although the draw against Southampton over the weekend was a setback. Atletico's imperious early season form has mellowed and Real Madrid has managed to close the gap on their city rivals to 3 points. Both teams will have to be at their very best to take anything from this match. An away goal will boost the Blue's chances heavily before the return leg at Stamford Bridge. Atletico Madrid has not lost in an away game in European competition since 2017, but what makes it interesting is that the last team to leave with a win was in fact, Chelsea. Hector Herrera and Jose Gimenez will be Madrid's notable absentees with Thiago Silva injured for Chelsea.