Krishna Kaul known by the stage name Krsna ( KR$NA ) after his latest hit Living Legend ft Rashmeet Kaur has sparked about rumored collaboration with Badshah on his Instagram. Krsna formerly known as YoungProzpekt is a rapper and songwriter from New Delhi, India. Both the Rappers posted about the collab with only 👑💲 caption and got almost 60k likes in just 4 hours on their accounts. 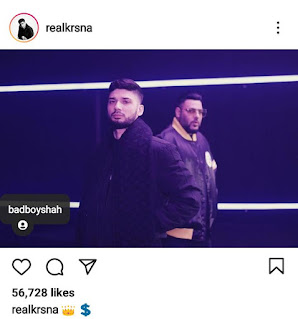 In 2020, Krsna has alleged that the IPL 2020 Anthem Aayenge Hum Wapas has been plagiarized from his 2017 rap song Dekho Kaun Aaya Wapas. On interaction with the news agency ANI, Krsna shared the certificate of Music Association of India (MCAI) , which states that his song is original composition. The singer said that he believes Rap is about the situation that surrounds you, in his interview with The Times Of India (TOI) in 2014. Thus, plagiarizing someone else works and hard work by such a large group of associations should not be permissible.

The desi hip-hop artist's first solo was Kaisa Mera Desh, which released in 2010. His second track was titled, Vijay. The singer released his debut album Sellout in 2014. He was also featured in the Voice of the Streets promotion by the makers of Gully Boy. Krsna latest single Living legend ft Rashmeet Kaur has crossed 30 lakh views on YouTube within a month.