BTS INFLUENCE IN INDIA AND HOW IT'S KEEP GROWING -->

BTS also known as the Bangtan, comprise seven member - Jin, Suga, J-Hope, RM, Jimin, V and Jungkook, South Korean boy band. Considered among the most influential celebrities in the world. While many K-Pop songs are about relationships and love, BTS cover subjects that not many artists like talking about like bullying, elitism, mental health and nepotism. Even after big language barrier many people from across the world including India love listening to them and get encouraged by them. It's true to say "Music is a medium that connects people."

BTS influence wasn't that much before the global pandemic in India but it's a totally different story now. There first ever English song Dynamite garnered 10 million views within 24 hours on Youtube, and among these there were 8 million Indian fans (also know as ARMY) who liked this video. Not only this but all the songs from there recent album BE charted on Top 10 Spotify for first few weeks. These Korean artists has been using their power and influence as a force for a positive change. Apart from achievements, K-Pop group's "Love Myself" campaign with UNICEF Korea has raised approximately $1.4 million for the fight to end violence against children. Just like the artists their fandom dedicates a lot of time to supporting charity and various organizations. 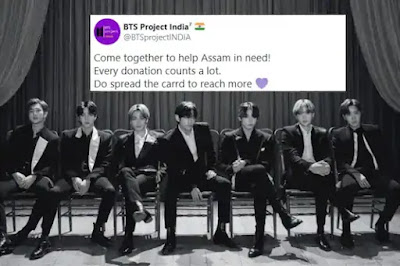 BTS's Indian fans have donated over INR 5,80,000 (roughly USD 8,000) to relief funds in Assam after the North East Indian state was effected by floods from May 2020 that lasted for more than 8 months. In addition to the 27 out of 33 districts affected, around 76 animals were killed after 85% of the Kaziranga National Park was submerged in the flood. These important topics which mainstream media most time forget. ARMY are very well known for their participation in regular charities for every band member's birthday e.g. to celebrate BTS band leader RM's birthday, One in an ARMY'S campaign is focused on Barefoot College's Digital Night Schools in Tilonia, India, for offering schooling that takes place during evenings and can fully function offline from any grid electricity. The campaign has raised over over INR 18,30,00 which was donated by people from all over the world.

BTS has never conducted a concert in India but after seeing so much love they decided to conduct NDTV interview with Rohit Khilnani. K-Pop sensation BTS said that they would love to perform for their fans in India: "We want to dance together, sing together.... say Namaste in person."

BTS said "There is no language barrier when it comes to music. We also listen to songs of various languages that we don't understand. Music is a medium that connects people. And we thank ARMY for enjoying our songs even though they don't speak the language."

This we will only know after this gobal pandemic, if Indian ARMY will get BTS concert for the first time or not. But the josh is very high!