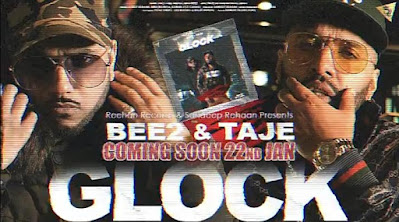 Bee2 is a British singer, musician, and songwriter, he has worked as an Indian musician, especially of the orchestra for the Andrew Lloyd Webber's and Bollywood-themed musical 'Bombay Dreams', working along side with A.R. Rahman. After his last hit "Figure" with 72K views on T-Series Apna Punjab, YouTube now he is coming out with the latest collab with Taj - E. He is one of the trending and freshest music producers in the industry with his best-selling albums such as his debut release, LOOKagain. Both innovative artists have decided to come out together with their upcoming new single "GLOCK" on 22 January presented by Rehaan Records and Sandeep Rehaan.

The teaser uploaded by them on Instagram is making a lot of noise with almost 2.2K views because of the unique style of mixing Punjabi folk sounds with some light western bass beats. Taj - E has earned a lot of reputation for creating some of the most exciting tracks in the past few years, which is why fans are really looking forward to it.