A case has been filed on the web show, Tandav in the Lucknow Police Station. -->

A case has been filed on the web show, Tandav in the Lucknow Police Station. 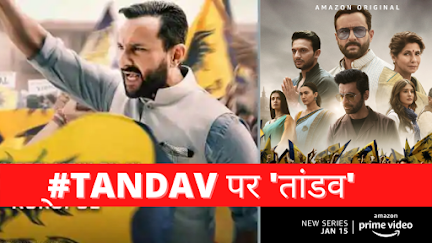 The troubles are mounting for Tandav. The Ministry of Information and Broadcasting has summoned officials from Amazon Prime Video. This is after social media erupted with rage seeing the scenes where Mohammed Zeeshan Ayyub is dressed as Lord Shiva. A number of people started the trend #BanTandavNow on social media.

Political leaders have also asked for the series to be banned. Now, Prakash Javdekar had met officials from OTT platforms and asked them to regulate the content that is shown on various streaming platforms. The ministry wants a response from Amazon Prime Video on the scene and its content. In a breaking development, an FIR has been filed on the series in the Lucknow Police Station. The complainants have said it insults the Hindu religion and Dalits.

In the meantime, critics have given it mixed reviews. Some have called it a 'Sasta House Of Cards'. We have to see how people from the production respond to it.