10 Of The Most Expensive Indian Weddings Ever -->

10 Of The Most Expensive Indian Weddings Ever

In India, weddings are not just a union of two souls. They are a full-blown event where money flows faster than the speed at which everyone rushes to the dance floor when Sukhbir's Ishq Tera Tadpave plays. In our country, there have been marriages that broke records and had a massive budget. here are a few of them.

10 Of The Most Expensive Indian Weddings Ever

In 2018, when the daughter of India's richest business tycoon married a business scion, everyone was in awe. The couple was admired by everyone but the wedding was a dream for many. From the location to the decoration it was all magical. Hard not to, when the wedding was spread across 3 places ( Lake Como in Italy, Udaipur, and Mumbai), the guest list included former First Lady of the US, Hillary Clinton, and over half of Bollywood, and the festivities included a performance by none other than Beyonce!

The notorious chairman of Sahara India Pariwar, Subrata Roy, hosted one hell of a double wedding in 2004, for his sons, Sushanto and Seemanto. From flying his guests on private jets to marrying 101 underprivileged girls, to serving over 100 cuisines to his 11,000 guests, Subrata Roy definitely left no stone unturned in making the double wedding a memorable and lavish affair.

Steel tycoon Laxmi Mittal's niece, Shristi Mittal, had a 'big, fat, Indian wedding' to rival most big, fat Indian weddings when she married investment banker Gulraj Behl in a three-day extravagant affair in Barcelona. 500 guests attended the wedding festivities, after signing a confidentiality agreement. Apart from this, over 200 butlers and cooks were flown in from India and Thailand, while Michelin-star chef Sergi Arola prepared the culinary spread and the couple cut a 60-kg, six-story-cake.

When mining baron Janardhan Reddy hosted the wedding of his only daughter in 2016 (yes, in the middle of demonetization), he spared no expense, quite literally. The wedding invitation card included an LCD screen, the bride wore a Kanjeevaram saree worth ₹17 crores and jewelry worth ₹90 crore. Over 50,000 guests attended the festivities, with the wedding venue designed to resemble the ruins of Hampi

In 2004, Laxmi Mittal's daughter Vanisha Mittal married Amit Bhatia in a three-day affair that took place in France. Setting the record for the most expensive wedding of the year, the festivities included a private performance by Kylie Minogue, a fireworks display at the Eiffel Tower gardens, and the who's who of Bollywood on the guest list. The wedding itself took place at Vaux-le-Vicomte, a historic 17th-century castle.

From a helicopter being gifted to the groom, to a safari suit, a shawl, ₹2,100 in cash and silver coin gifted to each guest, to a performance by actor Neha Dhupia, Lalit Tanwar and Yogita Jaunapuria's Delhi wedding in 2011 set new examples of what flamboyance looks like.

The Vaswani-Fabiani wedding was a lesson in what happens when billionaires get married. The #SoNavSoFab wedding took place in Vienna, Austria and singer Bruno Mars performed at the wedding festivities.

Touted as the most lavish wedding of the year, the welcome party for the guests was held at Vienna’s Palais Ferstel, the mehendi took place at the city’s Palais Liechtenstein Park and included a performance by Sukhbir, and the wedding happened at the Belvedere Palace.

Adel Sajan and Sana Khan hosted a cruise wedding at the Concordia-Class Costa Fascinosa cruise ship that sailed from Barcelona in Spain to Marseilles and Cannes in France, ultimately ending in Savona, Italy. From personalized Harrods' hampers for guests to a sangeet performance that saw a jugalbandi between Badshah and Vishal and Shekhar to a reception where Gauhar Khan and Sushmita Sen gave speeches and the couple cut a 10-layer-cake, this #cruisewedding definitely sailed smooth!

The netizens went crazy when the Indian cricket team’s captain, Virat Kohli, and Bollywood actor, Anushka Sharma’s hush-hush images were released. The power couple were dressed in Sabyasachi ensembles and tied the knot in the second costliest resort in the world in Tuscany, Italy. 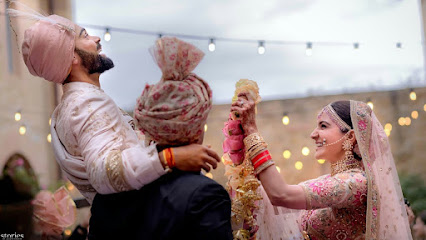 7 Recently Wedded Celebrity Outfits That We Can Take Inspiration From