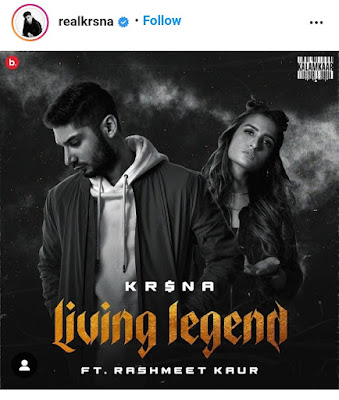 The poster of the song "Living Legend", from the album "Still Here", features Krsna and Rashmeet Kaur. The smoky poster has been beautifully crafted by Mauryan (Instagram: @iammauryan). "Living Legend" is releasing under the label of the music company, Kalamkaar Music. Hence, Raftaar (@raftaarmusic, Kalamkaar Raftaar) has also been tagged in the post by Krsna.
"Living Legend"- new song from the album "Still Here", featuring Krsna and Rashmeet Kaur, is going to be released on December 17.