SADAK 2 TRAILER GETS HIGHEST DISLIKES FOR ANY TRAILER TILL DATE 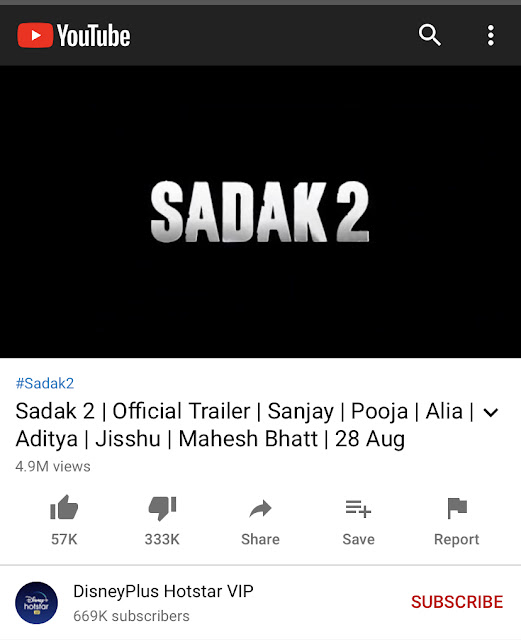 In what comes a shocking news for film maker Mahesh Bhatt, his latest upcoming movie, Sadak 2’s trailer has received the highest dislikes for any Bollywood Trailer on Youtube. Sadak 2 Trailer dislikes are the most on Youtube till 12th August, 2020.
Sadak 2 movie, starring Aditya Roy Kapoor, Alia Bhatt and Sanjay Dutt is directed and produced by Mahesh Bhatt. The movie was set to release in theatre’s on 10th July, however due to the Covid-19 pandemic, the film makers have decided to release the film digitally on Disney+ Hotstar.
Sadak 2 is going to be available for all users on 28th August, 2020. However, Sadak 2 Trailer has received negative reviews. Sadak 2 Trailer is the most disliked trailer in the bollywood history. Let’s find out the reasons why the dislikes are thrice the likes:
Bollywood Mafia is currently highly criticized by the youth’s of the nation. Social Media is trending with criticism against Nepotism. Sadak 2 movie is also a perfect example of Nepotism in Bollywood.
The death of Bollywood actor Sushant Singh Rajput raised the voice of the nation against Nepotism. People were furious against promoters of nepotism Karan Johar, Alia Bhatt and Mahesh Bhatt. Also Mahesh Bhatt is linked with the suicide of late Sushant Singh Rajput. He was spotted in intimate pictures with Sushant’s ex-girlfriend Rhea Chakraborty.
These reasons have laid the foundation for hatred against Mahesh Bhatt’s Sadak 2. The movie Sadak 2 Trailer has only 57K Likes and a massive 333K Dislikes. This means that Sadak 2 has the most dislikes for any bollywood movie trailer.
Shares
NEXT ARTICLE Next Post
PREVIOUS ARTICLE Previous Post
NEXT ARTICLE Next Post
PREVIOUS ARTICLE Previous Post
JOIN US ON