Turning Army Conference Hall Into Hospital for "Photography" is Just an insult ? -->

Turning Army Conference Hall Into Hospital for "Photography" is Just an insult ?

a recent visit to pm. Narendra Modi in Ladakh for the condolences and to lookout how the army is planning for indo-china disputes in gallwan valley with the chief defence minister Bipin Rawat 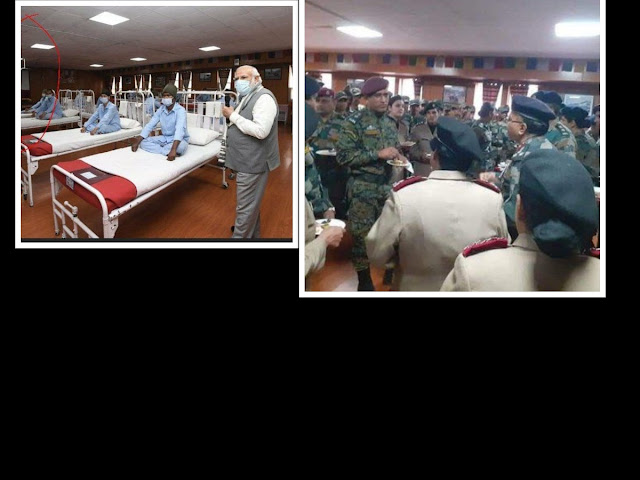 critics said that these were for photoshoot were none of the armies we injured all was hired for photoshoot with pm. Narendra Modi no nurses and all were sitting in the same poses straight there was no Availablity of dustbins, oxygen, mask, fruits , glucose bottle, bottle stand , monitors and most importantly nurses and doctors ,sandals of patient/ injured army

few of our readers message us to review this so we reviewed this
Turning Army Conference Hall Into Hospital for "Photography" is Just an insult?  Jai hind Jai Bharat


Now coming to the claim that the hospital visited by PM does not look like a hospital, that is because it is indeed a conference hall that has been converted into a hospital ward. It must be remembered that the entire world in the midst of Coronavirus pandemic, and all sorts of public facilities are being turned into makeshift hospitals to treat COVID-19 patients. Hotels, hostels, ashrams, schools, and even railway coaches have been converted to coronavirus treatment facilities. Therefore, it is no surprise that a conference hall has been used to house injured soldiers, but that does not mean it is staged and fake.


Moreover, as confirmed by people who have visited Leh Military Hospital, the conference hall is actually located inside the hospital, which has been converted into a recuperation ward for the mental wellbeing of the soldiers who bravely fought with Chinese intruders last month.