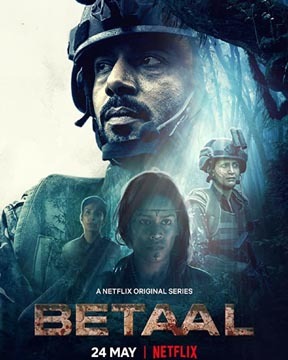 Betaal is an action, horror, and thriller TV series recently released on Netflix on 24th May. It is the first season by the franchise which consists of 6 zombie-centric episodes. Indian cinema and web series platform has been always deprived of zombie action. But, Betaal is an initial step of introducing the zombie genre at a serious note in Indian cinema. The series is about a remote village that becomes the arena of a breathless battle when an undead East India Company officer and his battalion of zombie redcoats attack a squad of modern-day soldiers.

Betaal being an action and little bit horror web series is been given a fair rating of 6.2 out of 10 by IMDb. Moreover, rotten tomatoes gave 84% of positive consensus which seems quite reasonable.

Also Read:  JUSTICE FOR KIRTI; GIRL MURDERED IN SAMBHAL, UP

The storyline of Betaal TV Series 2020

Betaal is an Indian fictional horror web series about a battle between modern-day cops and a centuries-old British Indian Army officer with his zombie redcoats. The series is written and directed by Patrick Graham and co-directed by Nikhil Mahajan. Produced by Red Chillies Entertainment, the web series stars Ahaana Kumra and Vineet Kumar Singh in significant roles.

Betaal's cast consists of some famous TV Series actors such as Vineet Kumar, Aahana Kumra, and Suchitra Pillai. Also, if you want to read the complete list of the cast of Betaal TV Series, click here.

The trailer of Betaal TV Series 2020

Below, check out the trailer of Betaal TV Series 2020.

If you want to download or Watch Betaal online, you can click on the link given below.